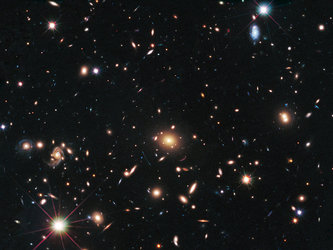 New outcomes from the NASA/ESA Hubble Space Telescope propose the arrangement of the main stars and systems in the early Universe occurred sooner than recently suspected. An European group of cosmologists have discovered no proof of the original of stars, known as Population III stars, as far back as when the Universe was only 500 million years of age.

The investigation of the absolute first systems stays a huge test in present day space science. They don’t have the foggiest idea when or how the primary stars and systems in the Universe framed. These inquiries can be tended to with the Hubble Space Telescope through profound imaging perceptions. Hubble permits stargazers to see the Universe back to inside 500 million years of the Big Bang.

A group of European specialists, drove by Rachana Bhatawdekar of the European Space Agency, set out to consider the original of stars in the early Universe. Known as Population III stars, these stars were manufactured from the early stage material that rose up out of the Big Bang. Populace III stars more likely than not been made exclusively out of hydrogen, helium and lithium, the main components that existed before forms in the centers of these stars could make heavier components, for example, oxygen, nitrogen, carbon and iron.

Bhatawdekar and her group examined the early Universe from around 500 million to 1 billion years after the Big Bang by contemplating the bunch MACSJ0416 and its equal field with the Hubble Space Telescope (with supporting information from NASA’s Spitzer Space Telescope and the ground-based Very Large Telescope of the European Southern Observatory). “We found no evidence of these first-generation Population III stars in this cosmic time interval” said Bhatawdekar of the new outcomes.

The outcome was accomplished utilizing the Hubble’s Space Telescope’s Wide Field Camera 3 and Advanced Camera for Surveys, as a component of the Hubble Frontier Fields program. This program (which watched six removed world groups from 2012 to 2017) created the most profound perceptions at any point made of universe bunches and the systems situated behind them which were amplified by the gravitational lensing impact, subsequently uncovering cosmic systems 10 to multiple times fainter than any recently watched. The majority of closer view system groups are sufficiently huge to twist and amplify the light from the more removed articles behind them. This permits Hubble to utilize these vast amplifying glasses to consider objects that are past its ostensible operational abilities.

Bhatawdekar and her group built up another method that expels the light from the splendid closer view worlds that establish these gravitational focal points. This permitted them to find cosmic systems with lower masses than any time in recent memory recently saw with Hubble, a good ways off relating to when the Universe was not exactly a billion years of age. Now in grandiose time, the absence of proof for intriguing heavenly populaces and the distinguishing proof of some low-mass worlds bolsters the recommendation that these cosmic systems are the most probable possibility for the reionisation of the Universe. This time of reionisation in the early Universe is the point at which the unbiased intergalactic medium was ionized by the principal stars and systems.

“These results have profound astrophysical consequences as they show that galaxies must have formed much earlier than we thought,” said Bhatawdekar. “This also strongly supports the idea that low-mass/faint galaxies in the early Universe are responsible for reionisation.”

These outcomes additionally recommend that the most punctual development of stars and cosmic systems happened a lot sooner than can be examined with the Hubble Space Telescope. This leaves an energizing territory of further research for the up and coming NASA/ESA/CSA James Webb Space Telescope—to consider the Universe’s earliest galaxies.